AEB Testing with the RT-Range

Autonomous emergency braking (AEB) is an increasingly important feature for modern vehicles. These advanced driver assistance systems (ADAS) identify a stationary or slowing vehicle ahead, and in some cases pedestrians, and apply the brakes if the driver fails to do so in order to avoid or mitigate an accident. The RT-Range system from Oxford Technical Solutions (OxTS) provides all the necessary tools and measurements required to test and validate these systems.

AEB systems are a type of active safety system that aid a driver with braking when an imminent collision is detected. They can either help apply the maximum braking capacity or independently apply the brakes if the driver fails to do so before the situation becomes critical. Utilising sensor technology such as radar, LiDAR, and optical cameras, the systems are able to identify other vehicles and determine whether a collision is going to occur. Some systems are now able to recognise pedestrians and can help mitigate potentially fatal collisions. Research conducted by Euro NCAP suggests that the addition of these systems are expected to reduce accidents by up to 27% and can lead to a significant reduction in injuries.

A few manufacturers already include AEB systems in their new vehicles. However, from 2014 Euro NCAP will include the assessment of the systems in their rating scheme. This means an AEB system will be practically required in order for new vehicles to achieve a top safety rating. Euro NCAP have defined a test protocol and requirements needed in order to benchmark different systems.

When developing AEB systems, vehicle manufacturers need to assess the effectiveness of their system and ensure it meets the requirements set by Euro NCAP. The RT-Range system is a complete tool that allows test engineers to validate their system and produce consistent, accurate results.

AEB systems are grouped into three main types. Some systems may fall into more than one category, or can even satisfy the requirements of all three. The categories are AEB City, AEB Inter-Urban, and AEB Pedestrian.

AEB City systems are designed to avoid or mitigate collisions at relatively low speeds, below 50 km/h. These types of collisions are usually low severity with minor injuries and damage, but are very frequent; a study of real world data by Volvo has shown that 75% of road crashes occur under 30 km/h. The system uses short range sensors such as LiDAR to monitor 6-8 m ahead of the vehicle.

AEB Inter-Urban systems operate over a higher speed range, around 50-80 km/h. They provide assistance in scenarios where a driver may be distracted while on a motorway or dual carriageway and can help to reduce more serious damage and injuries. Because of the higher speeds involved, the systems use longer range sensors such as radar to observe further ahead of the vehicle, typically 200 m. Inter-Urban systems are often combined with a forward collision warning (FCW) system that provides some kind of audio, visual, or haptic warning to alert the driver to the potential accident before the AEB system has to apply the brakes itself.

AEB Pedestrian systems are an emerging technology. An AEB fitment survey conducted by Euro NCAP in 2012 showed only two of the vehicle manufacturers surveyed offered an AEB system capable of detecting pedestrians. Pedestrian systems are more complex as predicting human behaviour is difficult and the system must be able to react properly to a valid threat but not engage for a false positive, for example when a pedestrian walks to the edge of the pavement but stops to allow the car to pass. These systems tend to use a camera in conjunction with some other sensor such as radar. 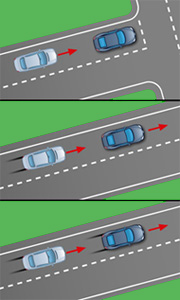 In order to rate the effectiveness of an AEB system, Euro NCAP have developed a test protocol to analyse the system in a select range of scenarios designed to represent the most frequent real world collision settings. These scenarios are Car-to-Car Rear Stationary (CCRs), Car-to-Car Rear Moving (CCRm), and Car-to-Car Rear Braking (CCRb).

In a CCRs test, the target vehicle is stationary and the test vehicle approaches with speeds incrementing between 10-50 km/h for AEB City systems and 30-80 km/h for Inter-Urban systems. The test is designed to simulate situations in which a driver approaches a stationary vehicle at a junction or roundabout. The driver may see the junction is clear and expect the car in front to move off when in fact it remains stationary, leading to a potential collision.

CCRm tests are only used for AEB Inter-Urban systems. In this scenario, the target vehicle travels with a speed of 20 km/h and the test vehicle approaches with speeds ranging from 30-80 km/h. This test represents situations where a driver might be distracted and fail to recognise that the traffic in front has slowed down or that a slower vehicle has pulled out.

The third type of test is the CCRb in which the two vehicles are both travelling at 50 km/h initially, then the target vehicle brakes with constant deceleration. The test is performed with combinations of 12 and 40 m headway and target decelerations of 0.2 and 0.6 g.

Driving robots are also recommended as even an experienced test driver would find it difficult to consistently meet the precise tolerances required for the test executions. For example, the deceleration of the target in a CCRb test must be reached within 1 s and cannot vary by more than ±0.25 m/s2 of the desired level. The RT series of GNSS/INS products and the RT-Range can seamlessly integrate with steering and pedal robots such as those from Anthony Best Dynamics to allow 2 cm accurate path following control as well as velocity and acceleration feedback for the pedal actuators.

Writing the book on AEB testing

The AEB test protocol as dictated by Euro NCAP requires accurate measurements of the test and target vehicle speeds, lateral deviation from a set path, and relative distances. Not only does the RT-Range calculate all these parameters and more, but it was actually used by Euro NCAP members Thatcham and ADAC to develop the official test protocols and define the requirements needed to pass the AEB tests.

The measuring equipment used to validate the AEB system must record data with a frequency of at least 100 Hz and with accuracies of at least:

The RT-Range used in conjunction with an RT product, e.g. RT2002, easily satisfies these specifications. As it was used to develop the official procedure, it is automatically compliant with the requirements set by Euro NCAP. It is also fully compatible with other test equipment such as soft crash target vehicles and driving robots.

The future of AEB

Initially only AEB City and Inter-Urban systems will be assessed in the Euro NCAP rating scheme. However, there is ongoing development of the test protocols and it is expected that by 2016 AEB Pedestrian systems will be included in the assessment.

The RT-Range already includes pedestrian detection functionality with use of the RT-Backpack. Lightweight and compact, the RT-Backpack is able to be worn by a person and just like a vehicle target, can transmit accurate position, velocity, and acceleration to the RT-Range to calculate relative measurements.

Software for the RT-Range enables pedestrians, target vehicles and static targets to be represented as polygons rather than single points, giving a more realistic view of the scene. This allows scenarios such as pedestrians emerging from between parked cars to be tested. The RT-Range can even calculate the percentage of the target visible to the sensors, allowing test engineers to pinpoint exactly when their system recognises the pedestrian.

A trusted solution used to develop the official requirements for testing AEB systems, the RT-Range is the perfect product for vehicle manufacturers looking to achieve a 5-star safety rating in the coming years.

For more information on the RT-Range visit www.oxts.com/RT-Range or contact info@oxts.com to book a demonstration.