More SBAS regions added for users in India and Russia 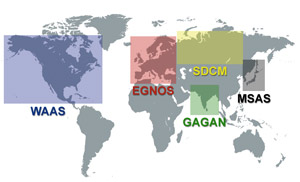 With this software release, we have added more service areas of satellite-based augmentation systems (SBAS) for our customers. In addition to North America (WAAS), Europe (EGNOS) and Japan (MSAS), the new software will allow users in Russia and India to use the SDCM and GAGAN services respectively with their systems.

The System for Differential Corrections and Monitoring (SDCM) is the satellite-based augmentation system in the Russian Federation. The GPS aided geo augmented navigation system (GAGAN) is an implementation of a SBAS by the Indian government.

Our OxTS customers can select their SBAS region in the options page of NAVconfig, our convenient user interface for configuring your OxTS GPS-aided inertial navigation system.

If you select “Auto”, then it will automatically pick up the relevant SBAS region and even transition between regions which is especially useful when operating in multiple countries/continents.