As progress in autonomous vehicle development has increased, so has the complexity and range of sensors on the vehicles being tested. As a result, the need for a robust ‘ground-truth’ reference has become more important. In 2005 OxTS equipment provided navigation information to two of the five teams that successfully completed the DARPA Grand Challenge autonomous driving competition, and since then OxTS has been a consistent and integral part of autonomous vehicle development.

This year OxTS are proud to have partnered with SAE International and General Motors in the inaugural AutoDrive™ Challenge competition, for which university students have been tasked with developing a Level 4 autonomous passenger vehicle over the next three years. The first event commences on 30th April in Yuma, Arizona, with the autonomous vehicles required to navigate a straight-line course and a dynamics course, and detect and avoid obstacles. Teams will be scored based on a number of parameters, including lateral and longitudinal acceleration thresholds, distance travelled, time taken and distances from lane markings and obstacles. In order to accurately measure the cars’ performance, each team has an OxTS RT3003 inertial navigation system (INS) installed securely on an RT-Strut mounting pole inside their vehicle. By blending data from the RT3003’s pair of GNSS antenna, RTK corrections broadcast from a base station and the output of the system’s inertial measurement unit (IMU), the RT-series of products is able to provide autonomous vehicle developers with accurate and reliable location, velocity and orientation data.

Using the setup described above, position data is accurate to 1 cm, velocity is accurate to 0.05 km/h and pitch/roll is accurate to 0.03°. In addition, OxTS’ gx processing technology tightly couples raw GNSS data with our IMU, while OxTS’ ix technology adopts single satellite aiding to generate position data even when fewer than four satellites are available. Additionally, it uses inertial relock to reduce the time it takes to reacquire RTK lock. Combined, gx/ix technology allows the INS to provide highly accurate data even in difficult GNSS environments, ensuring that autonomous vehicle developers have a robust ground-truth to validate sensor outputs and autonomous algorithms.

For the AutoDrive™ Challenge each RT unit will be co nnected to the RT-XLAN high-performance wireless LAN, enabling teams and officials within a 1 km range to monitor progress in real time using OxTS’ NAVdisplay software. In addition to the RT3003, each team’s vehicle will be fitted with an RT-Range S to survey obstacles and lanes and calculate the real-time range to the nearest of four targets.
After the event the data will downloaded from the units over IP and post-processed using OxTS’ NAVsolve software. Raw data and calculated range data from the units can be processed using correction data from a base station in order to mitigate against gaps in coverage or the transmission of RTK corrections. In addition, the magnitude of IMU drift during gaps in satellite coverage can be significantly reduced using forwards/backwards processing of the data.

Once the data is processed, the desired measurements can be output as a .csv file and compared with the scoring parameters to determine the final scores.

OxTS wishes all the participating University teams the best of luck for the competition! 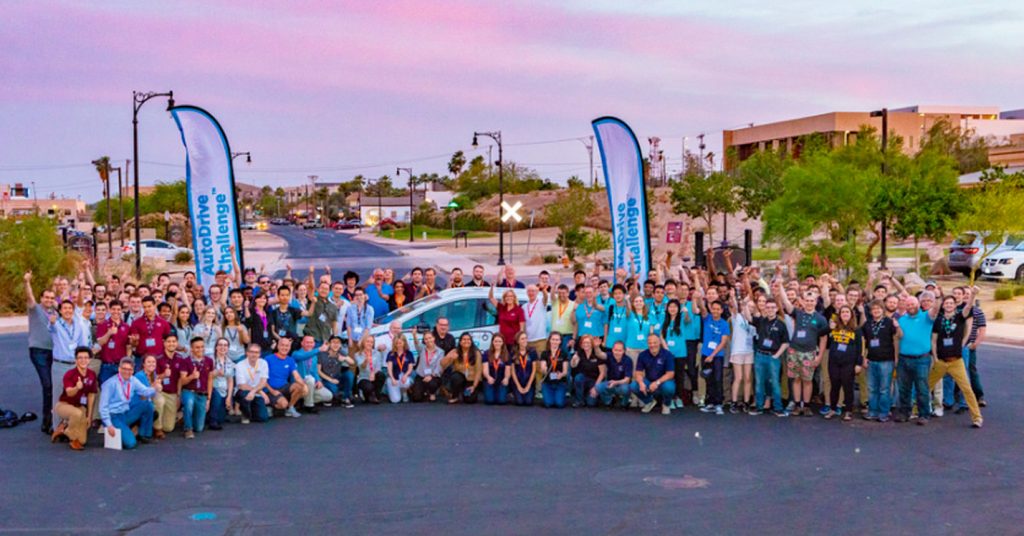